seal, stamp made from a die or matrix of metal, a gem, or other hard substance that yields an impression on wax or other soft substance. The use of seals is very ancient, examples of great antiquity occurring in China, Egypt, Greece, Rome, and other places. The most common form was the seal ring, of which the gem formed the seal. Ecclesiastical seals, used in the 9th cent., reached their highest perfection in the 13th and 14th cent. The use of seals with emblematic designs antedates the development of the escutcheon and is therefore important in the history of heraldry. Edward the Confessor was the first English king to adopt a Great Seal for the kingdom. Heraldic or emblematic seals are in wide use by national, state, and local authorities, by institutions of all kinds, and in the certification of legal documents. A committee was appointed by the Continental Congress on July 4, 1776, to prepare a device for the Great Seal of the United States (see United States, Great Seal of the USA). 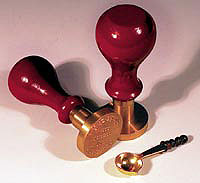 Stamp seal From Wikipedia, the free encyclopedia.
The Stamp seal and the Cylinder seal are stone type seals, first made in the Fourth Millenium and probably earlier. They were made of a hard material (stone), and used to "impress" their "markings" (picture, inscription, etc.) into typically soft, prepared clay.
This discussion does not adddress the "authority" (i.e., authorization) of the Stamp seals, nor their themes (e.g., glyptic) or topics.At the moment, the only references are the Tell Halaf stamps from the Halafian Culture in northern Syria on the Turkish border, and the much later LMLK stamps found primarily in Lachish. 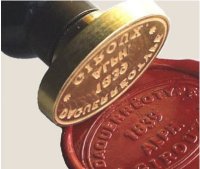